There have been public swimming baths in Shrewsbury for a long time, starting with the Roman baths at Wroxeter/Viroconium but even then things took time, as they’d been started 50 years previously and were only completed in 130AD during the Hadrianic period.

And apparently dedicated to: “BONO REI PVBLICAE NATVS”. The old Roman is often translated as: “Born for the good of the state” but I prefer to read it: “For the benefit of the children of the republic.” 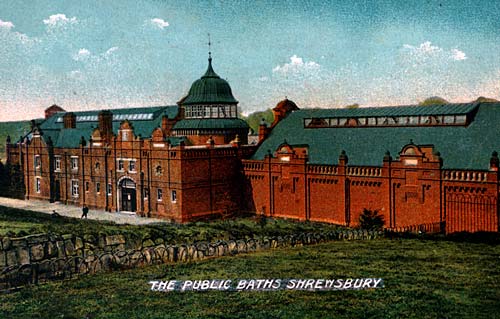 After a break of some 1500 years, the English were again persuaded that bathing was a “Good Thing“, with the first pre-Victorian municipal baths being built in Liverpool in 1829. It took over 50 years and the Golden Jubilee of Queen Victoria before the Jubilee Baths were built in 1894, based on the design of W. Chapple Eddowes (1892), at a cost of £8,000. At this time they were built mainly by public donation not from the local rates, with Alderman Butler Lloyd (local businessman and ex-mayor) raising funds to construct the baths as a memorial to Queen Victoria’s Jubilee.

These baths were very popular and 38,000 people used them in the first three months. Butler Lloyd and his wife championed the building of the baths both for personal hygiene of the public and to provide a place where the people of the town could learn to swim and to benefit from the physical activity. To this end, plans were made for swimming classes to be arranged, and a challenge cup established with an annual competition to encourage the young men of the town to learn to swim and to compete. It was also noted that drownings in the river were not uncommon (perhaps as a result of a lack of a safe place to swim) and it was hoped that the baths would help prevent these.

Affordability was also a key concern of the Baths Committee at the time of the opening of the pools. The second class entrance fee was established at two pence, but there was a concern that this could be prohibitive for some, and there was talk of whether this could be reduced to one penny, or even entrance made free at certain times. 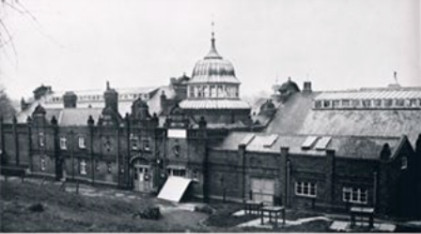 The Baths just before 1969 renovation

The original building was as important for its public bathing facilities as for the swimming pools. Local Shrewsbury residents can still remember going there to bath because their houses had no bathroom. As well as baths and showers the building had two pools, one 60’ by 30’ and one 80’ by 32’. The first had changing rooms, the second did not. The water was heated by live steam injection. It was realised in the 1930’s that the building needed extending and modernising and by 1955 swimming instruction created such a huge demand that public and school demands upon the pools meant that both could not be accommodated at the same time. A preliminary scheme was considered in 1962 and in ‘62-‘63 Salop County Council put aside a loan charge of £60,000 and the Walker trust a grant of £20,000. Work commenced in March 1967 and was completed in August 1969. Rome was not built in a day, but the new construction and the modernisation of the old were phased so that swimming could continue throughout. The capacity before the 1960’s expansion was not wildly different from that proposed in the Shropshire Council vision for 2025, yet population has grown by almost 40%.

After two years of work, the new baths were opened in 1969. They were designed and constructed under the direction of R.W. Gibb, the Borough Surveyor. The total cost was around £500,000 of which £120,000 was for the modernisation of the old baths. The new (Quarry) pool was constructed so that it functioned independently of the modernised ones (Caremont, Teaching and Priory Pools) and one can be shut down without affecting the functioning of the other. They include a 300 seat gallery to the Quarry Pool and a snack bar with access from the pool concourse or from the Quarry park area. However there is no access from the park area during the Flower Show (which started in 1875).

To avoid differential settlement the new building has bored piles and ground beams, so that the old building was not disturbed while making the foundations for the new one. Piles are tandem or triple driven to a maximum of 9 metres.

Retaining walls, subway and pool promenade slabs are all made of water retaining reinforced concrete with the addition of any waterproof additive or membrane. 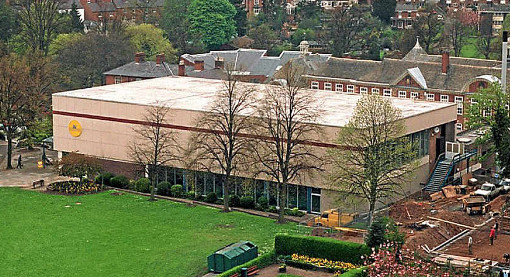 The superstructure of the new building is structural steel with columns and beams where necessary encased in concrete. The lower ground floor slab is of reinforced concrete and the upper ground floors are of pre-stressed cast concrete beams. Some of the old pools walls were re-built because of damage by water penetration and injected steam and it is said that the Priory Pool has suffered leaks from the time of refurbishment onwards. These are still a problem, but possibly new lining techniques can overcome the problem.

A further refurbishment took place in the first part of 1994, when the baths were closed for about four months so that work could be undertaken throughout the complex, and the extensive new gym facilities were added above the central area.

Swimming facilities have been in the Quarry Park for over 120 years. Let's make sure we keep them there - have your say.